Violetta is the most sought-after courtesan of the Parisian demimonde. However, her encounter with Alfredo makes her pleasure-seeking life seem questionable: they fall in love and try to build a life for themselves, far from the fast pleasures of the city. Her past, however, catches up with Violetta. Alfredo’s father persuades her that a separation is the only way to restore his family honour. Alfredo, unaware of the true reasons for her decision, insults Violetta in public. When they are finally reunited, Violetta has run out of time.

Giuseppe Verdi was on the lookout for such a provocative, innovative tale when he encountered the novel La Dame aux Camélias by Alexandre Dumas the Younger. In the spring of 1852 he saw the “Lady of the Camellias” as a play adapted by the writer himself at the Vaudeville Theatre in Paris. The impression this made on him strengthened his resolve to use the tale for his next opera; the story gave him an opportunity to reformulate his grand theme: love defeated by the resistance of society.

Violetta Valérie, a courtesan in the demimonde of Paris, was Alfredo Germont´s lover. She hoped for a respectable life together with him, but this was not permitted by the double-morals of male society and by a fatal disease. All that remains for Alfredo is remorse, and the impulse to idealize Violetta as a saint.

Scene 1
Violetta lets herself be celebrated as the most beautiful and expensive courtesan of them all, but she suffers from consumption and must reckon with an early death. Alfredo Germont, a young man who has long adored her from a distance and is finally introduced to her, has apparently fallen in love with her seriously. Violetta is confused: Should she accept the offer of genuine love or should she continue to abandon herself to short-lived pleasures?

Scene 2
Alfredo and Violetta have moved to the country. Together with her, Alfredo feels like he is living in heaven and doesn´t worry about how much this life costs. However, he discovers that in order to finance their country life Violetta is selling all of her possessions little by little. While Alfred is on his way to Paris to stop this by using his inheritance, his father, Giorgio Germont, comes to Violetta and asks her to separate from Alfredo. Her past doesn´t allow her to marry him, and furthermore it makes a happy marriage impossible for Alfredo´s sister, since the prospective bridegroom refuses a union with their family as long as the bride´s brother lives together with a courtesan. With great pain, Violetta agrees to leave Alfredo for the sake of his family´s happiness. She writes him a farewell letter. When Alfredo returns from Paris she tries to act as if everything is normal and leaves him alone under a pretence. Alfredo reads her farewell letter while his father stands ready to comfort him. But Alfredo only feels angry, offended, and betrayed. He realizes that Violetta has indeed accepted the invitation to Flora´s party, where he intends to take revenge.

Scene 3
Now Flora lets herself be celebrated as the most beautiful and expensive courtesan in Paris. Violetta appears accompanied by her former lover, Baron Douphol. Alfredo soon appears as well and wins a great sum of money from Douphol in a card game. In a final private talk Violetta pleads with Alfredo to leave the party because she is afraid that his provocations could lead to a duel with the Baron. When Alfredo pressures her more and more to come back to him she professes to be in love with the Baron. This makes Alfredo realize that their separation is permanent. In a fit of violence Alfredo humiliates Violetta in front of all the guests.

Scene 4
Violetta, fatally ill, has been abandoned by almost all of her friends. Only Annina remains at her side, and Grenvil, the doctor, comes to visit. It is clear to them all that Violetta has only a few hours to live. Once again she reads the letter from Giorgio Germont, which explains that Alfredo fled the country after the duel with the Baron, but that he himself and Alfredo will return to her soon. However, it is clear to Violetta that she has waited in vain and will die alone. But, suddenly her beloved Alfredo appears, and they look forward happily to a future together. Even Alfredo´s father appears and apparently gives their union his blessing. At the climax of their joy Violetta feels as if she has found the power to live once again – but instead she must depart forever. 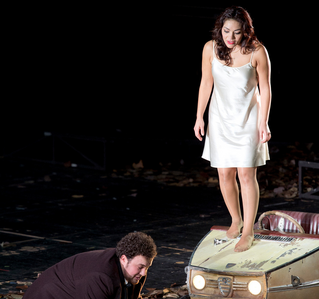 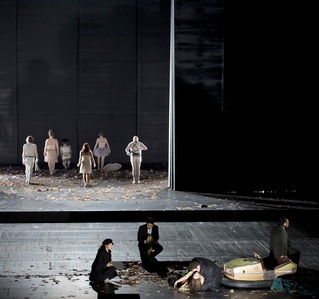 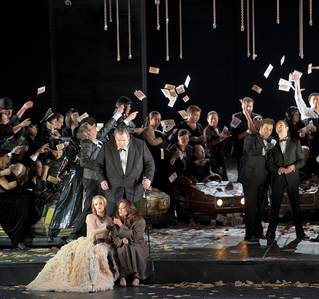