A storm that you do not need to run away from is a rare occurrence, yet one has just hit the Teatr Wielki in Warsaw. The source the Polish National Ballet is tapping is obviously Shakespeare’s The Tempest, the Bard’s late work and the only one that adheres to the unity of time, place and action. At first it was taken to be a comedy – well, some do say that comedy equals tragedy plus time. The first, highly memorable, scene featuring human figures emerging from the sea is doomed to be interpreted in the context of the current international situation. Let us then restate some general truths: where did life come to land after all? The globalisation we got is not the globalisation we all wanted, but Krzysztof Pastor’s ballet does sweeten the pill. It successfully draws on different orders, epochs and registers of culture. In the musical sphere, the Iranian daf frame drum takes the pride of place, while the poignant visualisations are the work of a duo of Iranian artists. The tempest created by Pastor and his collaborators is excellent: coherent, beautiful and escaping simplistic interpretations. The ballet will undoubtedly go down a storm.

Prologue
Old Prospero sits on his island, reflecting on the things that happened in the past. He once was the Duke of Milan, but he was expelled by his brutal rivals, together with his daughter Miranda. The island was not uninhabited when he arrived. Sycorax, her son Caliban, and their people had already lived there for a long time. Although Sycorax died some time ago, the indigenous Caliban and his people still consider the island theirs.

Scene 1
By conjuring up a storm with the help of the magical air spirit Ariel, old Prospero's memories are awakened. He remembers he arrived in a similar storm on the island after a shipwreck. Carried by the waves, the young Prospero was thrown on the shore with Miranda and they were saved by Ariel and Caliban. After his arrival on the island, the young Prospero immediately takes possession of it, with the aid of Ariel. Caliban and Miranda get to know each other, but Prospero takes care of his daughter and protects her vehemently. Nevertheless, Caliban and Miranda seem to be attracted to each other, which angers Prospero even more. Miranda is torn between the two men. Caliban feels rejected and upset about losing not only the power over the island.

Scene 2
With the help of Ariel, old Prospero conjures up a storm to revive his memories again. After some years another shipwreck brought his two rivals to the island, Stephano and Trinculo, together with Ferdinand, a young prince from Naples. Ferdinand is rescued from the waves by Ariel. Ferdinand is sad that he lost everything in the storm, but Ariel tries to console him. When young Prospero and Miranda find Ferdinand on the shore, Miranda is touched by the tragic fate of the prince. Unknowingly she is now entangled between her father, who is indecisive to let her go or not, and Ferdinand, who would anyhow be a more suitable partner for her, as far as Prospero is concerned. The closer Ferdinand and Miranda get together, the more upset Prospero becomes, and even Ariel cannot calm him down. For old Prospero the memories become very lively now.

Scene 3
With the help of Ariel, old Prospero conjures up a storm to revive his memories again. He remembers that the same shipwreck that brought Ferdinand to the island, also brought his brutal rivals Stephano and Trinculo. Caliban discovers them on the shore. In the beginning the two men are afraid of Caliban, which they consider as primitive, but gradually they overcome their fear and they even try to beat him up. The people of Caliban arrive to set him free. After a failed attempt to civilize Caliban and his followers, Caliban suddenly realizes that he could use these men for his plot against Prospero. Directed by Caliban, Stephano and Trinculo attack their old enemy Prospero with the help of Caliban's men. But with his magic Ariel freezes everyone on the spot in order to save Prospero and then he sends dangerous dogs in to chase the attackers. Although Prospero wants to punish and even kill Caliban now, Ariel convinces him not to indulge in revenge.

Scene 4
In a final attempt to revive his memory, old Prospero conjures up another storm. He envisages Miranda and Ferdinand in their attempt to lift a big tree, an obstacle he has once put there to keep them apart. But in their act of love, they manage to lift the tree and to push aside Prospero's power over them.

Epilogue
Now old Prospero can fully confront his past and meet his young counterpart. In a final reconciliation they all come together: Prospero, Stephano, Trinculo, Miranda, and Ferdinand. But by fully realizing what has happened during his lifetime, Prospero now understands that he lost his most precious possessions: daughter, youth, faith in humanity. And he realizes how unfair Caliban was treated by him. He ends up giving up everything. 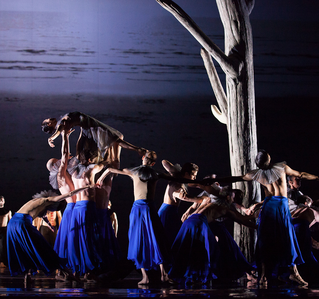 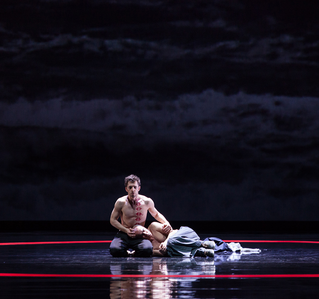 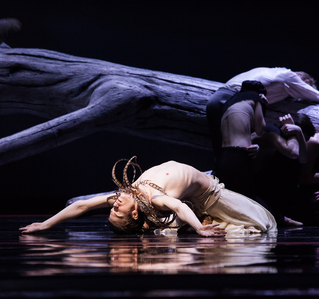 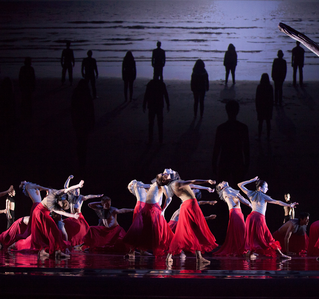 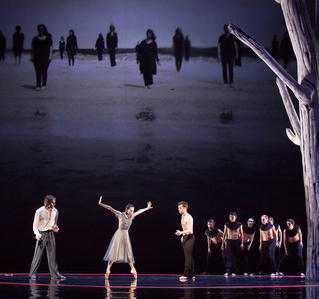 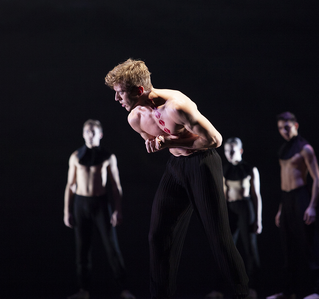 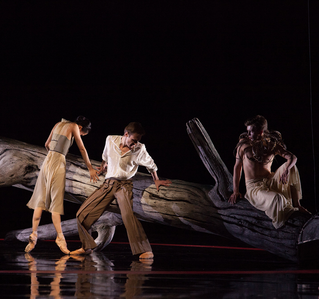 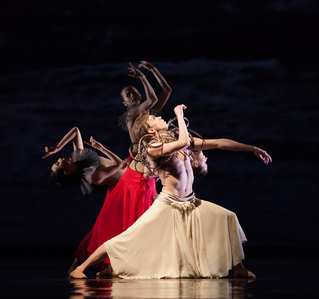 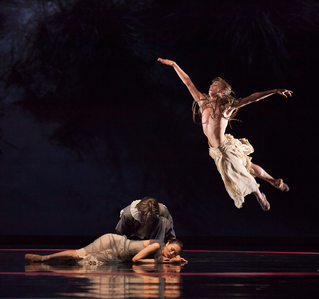